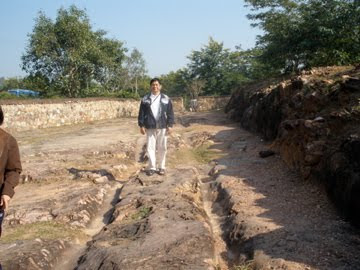 Rajgir was a big city 3-4 millennia ago. Thais also know its alias, Panjakhirinakara, which means the city surrounded by 5 mountains. Troughs in the ancient stone road created by carts thousands of years ago could be seen. The city was the capital of Magat kingdom.

After the capital was moved to Patliputra (Patna), after 2000 years, the city became a jungle, as viewed from the uphill road en route to "Kitchagut" hill (the Vulture head peak), where Lord Buddha 's Kuti was located. This clearly demonstrated the key principle of Buddhism, the 3 characters (Trilaks). Trilaks means everything (except Nirvana) has its start, its temporary existence, its end. A glorious city 3000 years ago is now visibly a forest. ( Well, I know that there is a (newer) small rural town in the name Rajgir located outside this mountain surround, but it is not the original Rajgir as Buddhists' regard.) 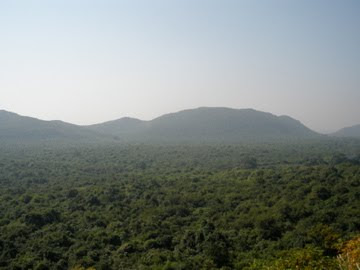