From Bangkok to Bodhgaya (Gaya)

Recently I joined a small group of Thais to visit India's main Buddhist pilgrimage sites.
I took a direct flight from Bangkok's Suwannaphum (officially spelled as Suvarnabhumi) airport to Gaya airport in northern India. The direct flight on a Boeing 737-400 was less than 3 hr. I 'd say over 95% of the passengers in the half full plane were Thais. A number of vegetarians who informed the check-in counter also got their vegetarian meal on board. Nice service. (Nope. I 'm not a veggie.) I believe this direct flight is operated only during winter (cold) season. At this time the passenger load was low, possibly because it's just the start of the cold season (and thus suitable to visit India) as well as the time of economic down turn. October is also the month for Kathin ceremony (an annual ceremony of cloth donation for selected Buddhist monks to sew their robes) so a lot of devoted Buddhists like my friends are busy at temples elsewhere inside the country instead of going abroad to India.

We arrived at the Gaya airport just before 2 p.m. Indian time, 1:30 hr behind Bangkok time. We had been warned that there might be a small hassle to pass through many of the red tape at small Indian airport like this. This is the first airport I have encountered that boarding pass of everyone was rechecked after disembarking from the plane and just before getting into the terminal building. Amazing. Inside, I was then asked by someone in mixed English-Thai sentence asking for a pen so I gave him a 10 Baht gel pen in order to get into the country smoothly. Then there was a step when declared no. of luggage in the custom slips must match the number of things each of the passengers was hauling pass the terminal or one would be stopped at the exit door. India incredibly have officers at various steps to do all the unnecessary "tasks". Interestingly, I think our flight was the only one for the day.

We went straight to from the airport to the hotel in Bodhgaya (Thai called it verbally "Buddhagaya"), perhaps the main gateway to trace back Buddhist history in India.

We started by visiting some international temples first. It looked like those beggars and hawkers were mainly targeting (generous hearth) Thai tourists. It was amazed that many of them would try their best to annoy us so that they could get money. And some kids would not leave even after they successfully got some. Soon we learned our lesson on how to deal with them.

A picture of our plane taken at the Bangkok International Airport is shown below. 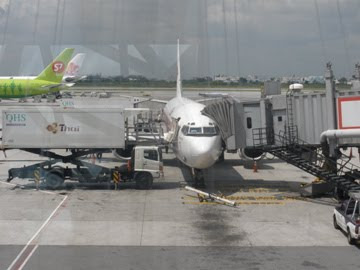