Around the old Rajgir (1) 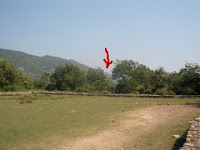 After coming down from the vulture head peak, we briefly stopped by at the location where King Bimbisara of Rajgir was jailed and starved from foods (2600 years ago) by his son, King Ajadsatru (I spelled the way Thai people pronounced). From this area, the jailed King Bimbisara could look up to Buddha's shelter on the peak (arrowed) and possibly felt mentally comfortable while conducting his walking meditation to spend time in his cell. Without food he could live for a rather long time, until the new King sent a barber to make cuts on his feet so he could no longer walk, and eventually died. The story in Tipitaka also said that on that day, King Ajadsatru had his newborn baby and loved it very much. Soon he realized that his dad must have loved him so much too. But when the King ordered for the release of his dad, it was already too late to resurrect the former King's life. It 's a sad history.
Posted by Burachai Sonthayanon at 8:19 PM