Toward the vulture head peak 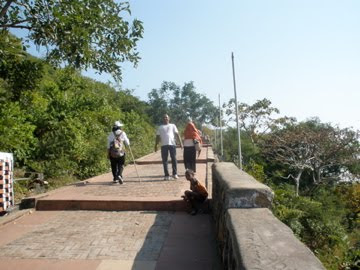 Walking uphill to the vulture head peak (or Kitchakut hill) via the Bimbisara road was a pleasant walk in October weather like this. I wore a jacket but did not feel hot. The ultimate goal is the original Buddha's Kuti (shelter) on the hill top. However, along the path there are several important points, including the location where Devatata pushed big stones downhill aiming to kill Buddha, a cave where Phra Mokalana meditated, and a cave (Sugarakhata cave, or Pig head cave) where Phra Saribut (Sariputta) became an Arahant. Pictures are shown below. I think the gold leaves pasted on these caves could probably be attributed by Thai people mainly. They came here to worship, to chant mantra, and to meditate.
Notice small stars inside the Mokalana 's cave. 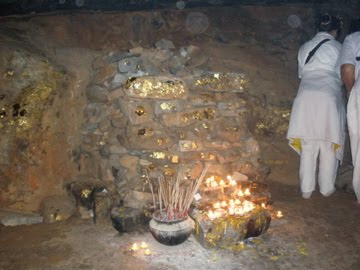 Sugarakhata cave was an important place mentioned in Tipitaka, where Buddha was teaching to Thikanaka while Sariputta was fanning the Buddha nearby. After the teaching, Thikanakha became a Sodapun while Sariputta, already a Sodapun by that time, became an Arahant. Besides, Sariputta was a wise teacher, second only to Lord Buddha. Buddha taught Abhidhamma only briefly to Sariputta, but he then explained in-depth to his students. Since I am an Abhidhamma student, I consider myself a student of his as well. 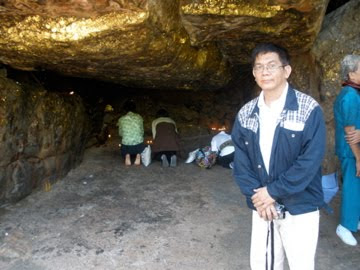