I think if one ask young Thais,

Why do millions of people went out in the evening to put down small candle-lit and incensed sticks-lit flower floats along rivers or canals ?

, I guess new generation people might answer that the festival 's just for fun. I think if they did answer like that they would probably be right. For hundreds of years, that how young men had chance to meet young women at a rare night festival like this. Some might say otherwise that it is chance in a year to pay tribute to the river angel (Phra Mae Kongka) for providing life line to peple's living. But I would say that explaination was based on Hinduism belief, not Buddhism's. I 'll put down Buddhists' view point down here, which hopefully would be more useful to Thai Buddhists.

Those are the reason why I and people in our group put down floats at the Ganges river at Varanasi 4 days earlier, while we were still in India. 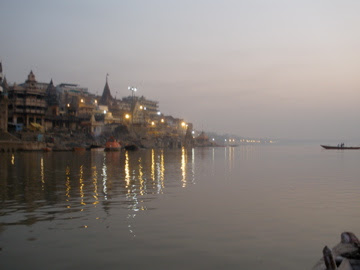