A book set in the mail today 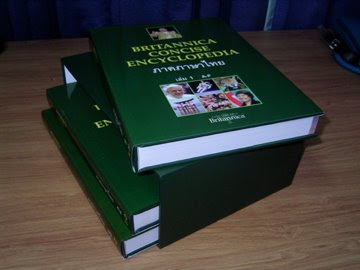 I just received a set of Britannica Concise Encyclopedia (Thai language) from the publisher in the mail today. I was informed that the retail price is about 9900 Baht or so but I got it gratis since I was among 50 or so Thai scholars who did the translation (and editorial works) for them. (I blogged on this twice already.) For biological topics, I split about 50:50 with a younger colleague. It was a behind-the-scene job about 2 yr ago, like a Thai adage which says it 's like "affixing gold leafs on the hind side of a Buddha image". I hope this set of reference books would be useful for education of Thai kids for years to come. I was told that some 2000 or 3000 sets would be donated to schools in Thailand. Thanks to various sponsoring organizations. (The only bad experience about that translation task was that I was forced to use a Windows XP-based software. I could not use my Mac for that. And it tooks us some 4-5 months. Urgh! Had I known that earlier I would not have accepted the work.)

I plan to donate my copy to a Thai school too, but I probably wait for some time though. I have over a thousand Thai and English language books from my personal library that I am thinking of donating to a remote school somewhere and I think I might bundle this set with them too. I am now still looking for a suitable place to donate my collection, perhaps in a high mountain area. I want to fulfill my childhood dream (perhaps 40 years ago) of building a decent library in a jungle hill that will serve as a remnant of Thai and international civilization that might last through any doomsday event. Any school getting my collection would probably be like hitting an academic jackpot since I am a serious bookworm and have accumulated books for several decades. I must point out that many good non-fiction books in Thailand were usually printed in small numbers, like 1-2000 copies only and no more reprinting. So my collection is unlikely to be matched by others easily. Some of my books I started buying was when I was still in grade 5, including my first book about Apollo 11 and the first landing of man on the moon. I noted down that paid 6 Baht out of my daily allowance to buy it.

By the way, I still remember that landing event some 40 yr ago quite clearly. On that first lunar landing day the entire school did not have any class, but we were all downstairs watching anxiously a global television broadcast (in black and white TV). That 's a long time ago. And then perhaps a year after that I bought that book.
Posted by Burachai Sonthayanon at 6:46 PM No comments: