There is a good news about recent openning of a Buddhist meditation (Vipassana) center in Israel last June, 2011. News in Thai linked above.

I am pleased with the news, and would like to congratulate the people of Israel for this opportunity.
Posted by Burachai Sonthayanon at 10:24 PM No comments: 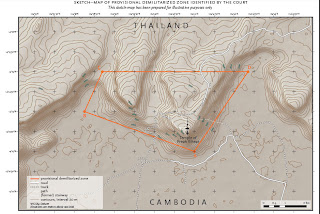 Look at the map of the border area between Thailand and Cambodia at Khao Praviharn area. From the contour map it can be seen where the border is, or was.  Around 1962 (I recall from memory, did not look up), Thailand lost the case againt Cambodia in World court against all odds and was sentenced to surrender the tip of the Khao Praviharn, against the common sense of most laymen, any nationality. I heard that Thailand's position is that she never accept that sentence in full, pending new evidence in the future that can be used to resurrect the case again.

Now, with initiatives of Cambodia, the World court is asking both Thailand and Cambodia to withdraw troop from wider areas.  I personally don't believe Cambodia would withdraw their soldiers from the peak. Nor do they plan to withdraw their civilians from the area.  I think we are aware of ancient tale about a gentle horse that was squeezed out of its shelter by another hostile horse. Cambodia under the present leadership has been trying to squeeze in their soldiers (without uniforms) and their families to occupy that area, and has been aiming to expand the beach head and thus escalate the situation.

Personally I don't like to see any fighting to erupt since fighting will waste lives of good people from both sides. Soldiers and villagers from that area in both countries are mostly hereditary related and why do they have to kill each other due to a land dispute instigated by certain politician(s). (I don't want to name names, it's against my blogging principle.)  We all don't have much time left for our lives.  Looking back over multiple centuries of history and anyone can see that border lines usually shifted after some time, even some new countries arose along the way.  Usually, it is the politicians who tried to exploit and gain benefits from situation, e.g. to improve their domestic political position while small people are casualties for their actions.

I think Thailand has been cheated of its legitimate border by the World court due to her trust in Western legal system, blindly ignored the omnipresent back-end dealings among powerful western countries, which she should not have. She had a militarily upper hand during the conflict in the 60s. People of both countries would be at perfect peace and better off now had the area was still under Thailand's jurisdiction.  And now, 50 years later, some politicians in foreign countries have tried to exploit her situation further. When I drove to that area last year, I sadly could not enter the National park area in my own country their due to occupation by foreign troops.  I could not admire its natural beauty in that area, let alone the civilization relics there.  I think previous Thailand governments up to the Abhisit government have to accept the responsibility on their past inaction on this issue for decades.

I am about to become a Buddhist monk in the future, so that the way I look at it, and I think that is from a neutral point of view.

P.S. I can't help but recalling well the ending of the tale of the horses. We 'll see.
Posted by Burachai Sonthayanon at 7:12 PM No comments:

To cure a procrastination habit ?

I just realized that there is a term to describe a personality that I might belong.  From a website I found articles written by a Philosophy Professor (I suppose), there is a habit he called "Structured Procrastination". Good reading article, even from the front page. But the linked page is also good. I just realized I must have inherited my mom's Perfectionist trait. Oh, Boy, and I though I was sloppy and unorganized. In a mess, or chaos, there must be hidden ordered structure, I guess. Aha !
Posted by Burachai Sonthayanon at 9:49 PM No comments:

Learning curve for Thai about politics

At this time of writing this post, I will go to cast a vote in the next few hours for a general election in Thailand. I am not excited about it. I expect a worse political situation after this election day. I expect any wining party to face protest from opposing people. I think a lot of people in Thailand are still in their learning process of democracy. Any adverse condition will be another lesson in a steep learning curve on politics for people in Thai society to learn.

I am not particularly fond of western style democracy in Thailand now. The system has been abused severely by corrupt politicians. I think a better democracy that suit Thai culture better is to integrate many Buddhist peaceful and wisdom-based doctrines into Thai politics.  For example, if Thai politicians are forced to obey the 5 precept strictly or they would face impeachment, then Thailand would be free of corruption and people would be much happier.
Posted by Burachai Sonthayanon at 1:30 AM No comments: