Will Bangkokian get a "lamppost" as the new governor ?

There will be a Bangkok gubernatorial election (actually his status is more or less a mayor) this weekend. Former PM Thaksin, now in exiled, said earlier that if he would file a lampost as a candidate, it would be elected. So I am curious if his candidate would win or not. We 'll know in 3 days. I will vote for sure.  Polling has indicated a tight race between the former Bangkok governor from Democrat Party and the candidate from Puer Thai Party.

I am more concerned about the excessive money extravagance scheme that Mr. Thaksin's candidate was trying to sell to the lower income and less-educated red-shirt voters, such as free-of-charge buses.  Imagine more of the vacant buses roaming around the city with not many passengers and burning fuel in the traffic jams? That would put up lot of financial pressure to the public. I just think that he is the type of politicians who are irresponsible. They think they can borrow money and spend the money as they wish in order to get votes, and benefit their associates' businesses along the way, but they have no regard as to whom would have to pay back those public debt in the future, i.e. our children.

BTW, I love this comics showing the PT candidate as a Trojan horse, and the PM pushing it from the back.

Update: Mar 3, 2013, 6:15 pm. Bangkok 's time.
From unofficial counts, over 50% of votes turned in so far, the former Bangkok governor from the Democrat Party looks like he is a winner. I am a bit relieved that we won't have "a lamppost" to burn our tax money and burden our future children.

Update: 6:20 pm.  The PT candidate and the PM have announced that they lose the gubernatorial election.
Posted by Burachai Sonthayanon at 11:39 PM No comments:

I went to the area in Bangkok known as "Prachan Pier" area yesterday afternoon to buy Thai philosophical and Buddhist books at Mahachula Bannakarn bookstore near Wat Mahathat, within a walking distance from the Grand Palace.  It is perhaps the best bookstore for Thai Buddhist books (mostly Thai but some English language, locally produced, are available).  I believe the bookstore is affiliated with MCU (Mahachulalongkornrajavidayalaya University) and are regularly patronized by Buddhist monks. 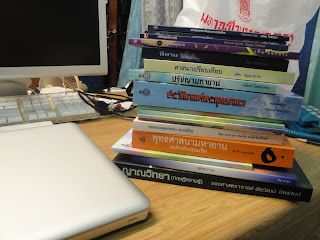 I bought 17 books today, some are about Mahayana, and some philosophical (Buddhist viewpoint) books.   These are on top of some two hundred Buddhist books I have purchased before.  I have an idea on the topic I want to write about, but first I need to make sure I know what Thai people have talked or read about. Now is my reading time.