On October 24, 2009, from Sujata's house near Gaya, our group traveled in the afternoon in a new air-conditioned minibus to Varanasi. A portion of the road that we took was a 4-lane divided highway with toll plazas along the way. We stopped by to have an afternoon tea at a gas station, Indian tea with ginger added, that I heard they call it Kalam Jai, so we Thai called it in a similar sound but in Thai language as "Kamlang Jai" which means "enrouragement or moral support".

Of course, on a long road journey like this we need that refreshment as an encouragement, esp. when there is no clean restroom for us to use. We thus had the first chance to use "the largest toilet in the World" on this route, that is the open air, to relieve some internal pressure once in a while. For ladies, the tour company have some foldable personal tents to be used as mobile toilets for them. Yes, those tents are mobile, since it has to be moved after each lady is finished with the business and the next lady surely would not want to use the same spot as the toilet. Before this trip, I had read some Thai books about trips to India before and I know that Thai people had developed a convention of using the open air as toilets along the way, i.e. women go to the left of the bus, men go across the road to the right side of the bus, monks go the front of the bus, nuns go to the back side of the bus. :-) On our road journeys, we try to keep that convention, i.e. men tried to use the right side of the road and women tried to use the left side when possible, although that 's not always possible. It 's o.k. now since women now have tents to keep their privacy during such awkward situation. For me, I tried to manage myself quite well and I tried to have "heavy task" at the hotels, i.e. in the early morning before each day's departure and late evening after arriving at the new hotel. I only used roadside for "lighter task".

About an hour before we arrived Varanasi, we started to smell some pungent unique smell, probably due to smog. Varanasi, as Thais called Banarasi, is perhaps a 4000 years old city, or perhaps older than that. I have been to India before this trip, but never before to Varanasi. That day, I though that I felt I just reached and felt more of India.

That evening, we went to the Ganges to watch a ceremony in the evening of daily worshipping Suriya Dev, the Sun angel. I had seen that evening ceremony in a Thai documentary DVD before. There were thousands of locals on the river bank while hundreds of tourists (seen in the foreground in the picture) were floating in perhaps a hundred rented boats in the river snapping pictures along the way and during the ceremony. We stayed there to watch the sacred ritual for about half an hour before heading back to the hotel in preparation for tomorrow early departure to Kusinara (Kusinaga). I had some feeling about their ceremony. One remark though, quality of the the river in some area, esp. the pier that they cremate bodies was "not clean". It's amazing nevertheless : I have heard before a saying that bonfires on the Ganges bank at Varanasi never stop for thousands of years. We 'll be back to this area again in the next few days but in the morning. 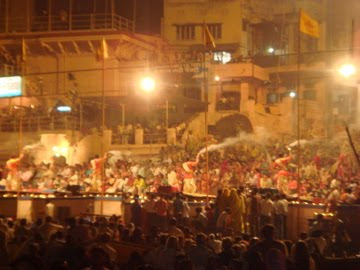