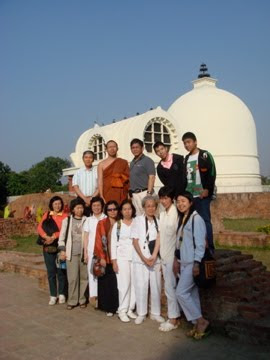 From Varanasi, we headed to Kusinara as Thais called its old name of 2600 years ago. The current name is Kusinagar. The road was narrow, and there were traffic jams along some intersections and railroad crossing. The bus could not drive fast. On a bridge crossing a river, there was only one lane and thus vehicles had to take turns.
We arrived at Kusinara in the afternoon. We went to the main stupa at Kusinara, at the spot where Lord Buddha (died) went to Nirvana 2552 years ago. We took a group picture in front of the stupa and went inside the main Vihara for chanting mantra and meditation. We then also conducted a 3 round clockwise walking around the main buddha image there. He is in the final resting posture. We felt as if we were just visiting the Buddha who just passed away only moment ago. While chanting I had some mixed deep feeling of pleasure and sorrow. My master (the monk) also brought a yellow and golden robe as a blanket for the image as a homage gesture. Later, we went out to visit the cremation site, about a kilometer away, where a stupa was also erected. We had an evening chant there until being chased away by darkness and mosquitoes. 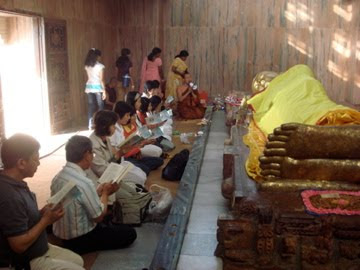 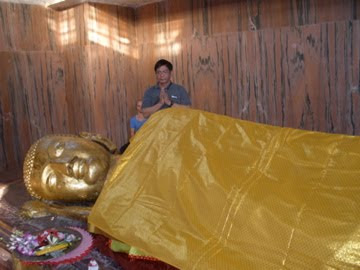 After arriving at the Kusinagar hotel, we also walked out to a nearby Bodhi tree, marking the site where the remains of the Buddha after the cremation ceremony was divided by "Tona Brahmin" into 8 parts, one part for his own King and others to give out to emissaries send out by 7 other Buddhist Kings to get their share of the relics too. This is a "sacred site" rarely visited by Buddhists. We chanted there in the dark, and took pictures. There were unusual large number of "stars" seen in the pictures. Obviously, the "stars" are caused by particles which reflected the photographic flash light. However, interpretation on the nature of the particles is up to individuals. I can say that the weather at that time was quite nice and I did not feel the presence of dust or any particles. Afterward, we walked to the nearby Thai temple at Kusinara. This is an "official" royal temple erected by the King of Thailand and the Thai government. It has the same status as hundreds of official royal temples in Thailand. We conducted a chant inside the main Jedi (from the Pali word "Jetiya" = pagoda) there. We also donated some money and stuff there to monks and officials of the temple. It is a very beautiful temple, even at night. 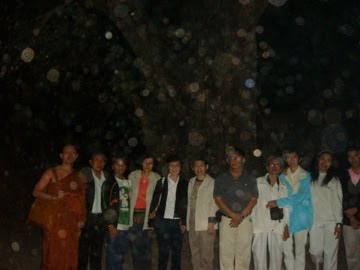 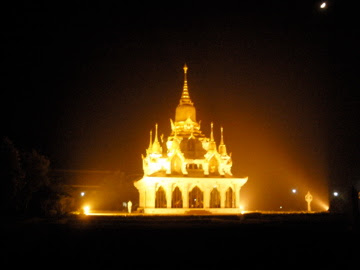 Anonymous said...
This comment has been removed by a blog administrator.
10:23 PM