Our trip to Lumbini, Nepal (3) 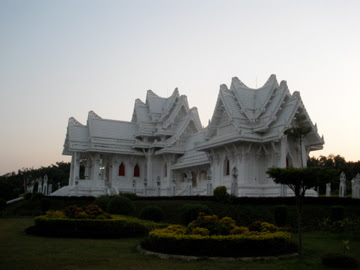 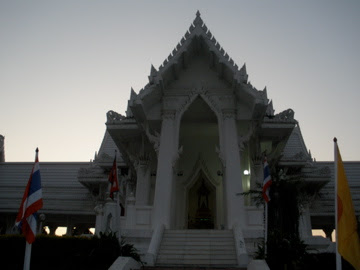 Late afternoon, we went to Wat Thai Lumbini. It is also an official Royal Thai Buddhist Monastery, since its construction was funded by the government of Thailand and donation from the people of Thailand. That was a very good deed by "a" government and I 'd like to say Anumodhana with them (although I currently do not have positive attitude to that former Prime Minister, you guess who).

We first headed to a wellcoming Sala to have some complimentary drinks and snacks. (Well, we donated some money later.) It has a very beautiful ordination hall (Uposoth), designed by a prominent Thai architect, using a mix of Thai and Nepali styles. The long structure of the hall is supposed to represent the Himalaya mountain range and the white color is to represent the snow.

We went inside the Uposoth to make merit, where the presiding Buddha image is made of white jade (from Burma), and styled after the Emerald Buddha in the Royal Grand Palace in Bangkok. We were told that another replica of the white jade Buddha image, slightly larger, and decorated with gold, was given to HM the King of Thailand. I believe a major sponsor of the construction of the buddha images was Thai Airways International, since I noticed a logo in a sign nearby.

Some of us (me included) bough some Thai designed and produced "Baby Buddha" images from the temple. The money would go toward the activity of the temple. Since this temple is in the park where Lord Buddha was born, and there was a story that he immediately could walked 7 steps before proclaiming his "Asmiwaja", or the great utterance. So this Thai temple has a numeral sign code as 979, in Thai "Kao Jed Kao" means "walking 7 steps forward". Other temples under the same abbot has other codes, such as 960, and 980 (for the 60th coronation anniversary, and the 80th birthday anniversary of HM the King). (Really smart, your venerable.) 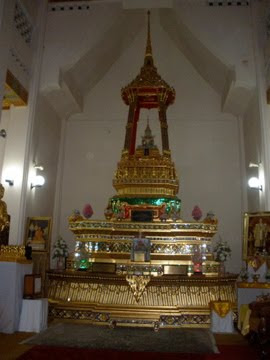