Our trip to Lumbini, Nepal (4) 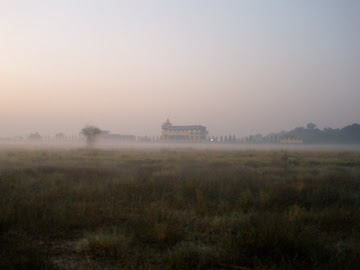 Next morning we had to leave Lumbini early in order to try to cross the border back to India as early as possible. I missed the nice morning weather there. 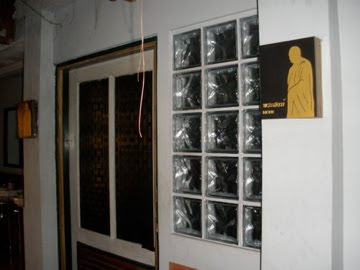 After we crossed back to India via the same check point, we stopped by at a new Thai monastery called "Wat Thai 960", to "visit" the facility (among the cleanest toilets in India, we believed). There are a lot of plants so those are nice toilets in a garden. They also have restrooms specifically for monk. (In the picture, airy roots of ornamental plants hanged in front of it to provide green atmosphere.)

The temple also provide some complimentary coffee, hot snack (newly fried Roti with condensed milk!) for us. Thanks. I also donated 1000 Baht to help in the land buying for a new Wat in Savatthi (Saravastri), in addition to another sum to help building additional clean restrooms for traveling Buddhists who mostly would cross the border at Sonauli. 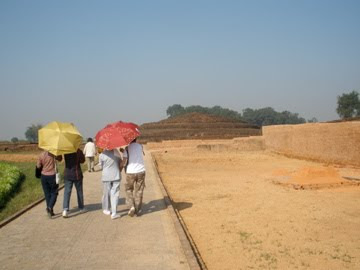 Afterward, we went to an archeological temple of Kapilavastu (on the India side). This is another important place since the stupa there is the place where the British found remains of Lord Buddha with ancient inscription saying so over a century ago. A part of the remains was given as gift to King Rama V of Siam, and now they are at the Golden Mount's top in Bangkok. I was the one who recognize this fact so, after I told my monk master, he led our group to do the 3 round circum-walking and chanting around the stupa again.

We stop by at a resort to have a lunch. Hidden behind the vast poverty of Indians, this big mansion is a former palace of a Maharaja built in the colonial style. Nice place. They also have rooms for anyone who might want to spend the night there too. But I think we Thais felt a bit creepy although I heard westerners love to stay here a lot. 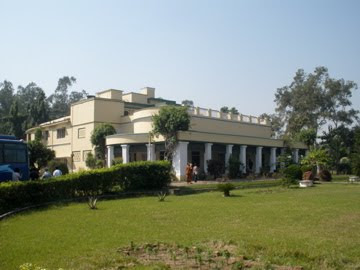 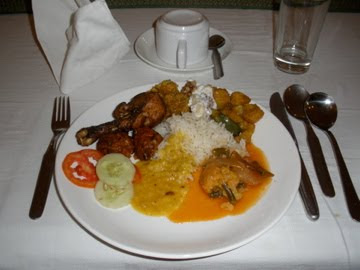