Amid external turmoils, internal feeling could be peaceful.

Consciousness meditation, Vipassana, is the Buddhist technique to attain peacefulness inside. Meditator has to disengage the mind from the body. The mind can be further unassembled into Vedhana (the feeling of happiness or unhappiness), Sanya (memory, thinking, comparing), Sangkhara (others). Upon doing so, the selfness disappear, so long as the consciousness remains. It will be clearly seen that selfness or ego is an illusion, not real. "You" don't really exist in the ultimate sense. So when "You" don't exist, there is nobody to actually suffer. Therefore external turmoils are separate entities that have nothing to do with the neutral observer.

By the way, I just also found recently that there was a recent google talk VDO about using this technique to relieve stresses. I have not watched it though, although I have already downloaded it via Miro. It looks like some westerners started to pick up this Buddhist ultimate gem. However, let me add that this technique is to take "you" to Nirvana, not only to let go the stresses just temporarily. 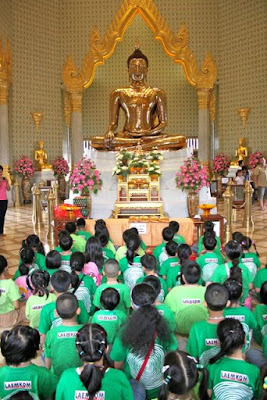