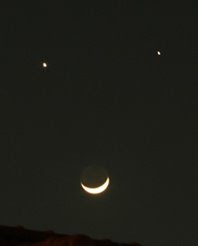 Many people mentioned of the smiling moon they saw last night. Some people send e-mails to their friends, with the photos they took. I also found a post in a friend 's blog (link given above). The celestial phenomenon seemed to give every Bangkokian who saw it a rare smile these days. Here I join my smile to spread the words around in the blogosphere. We, Thais, still have some hope and smiles while buried in this serious political situation.

(Photo credit : A copy of the picture posted in my friend 's blog)

Addendum:-
After I wrote the first part of this post, few hours later the high court ruled to disband 3 government parties. Then in the evening, as I watched on TV the royal guards' marching in front of H.M. at the Royal Plaza for his coming birthdays in the next 3 days, I had an impression that everything would be over by that day. A couple hours later, it was announced that the siege of the two airports would end tomorrow morning. Finally, the much predicted serious bloodshed seems to have been thwarted. I now feel relieved. The hugh financial losses for people and the country will come soon, but not to worry too much for now.
Posted by Burachai Sonthayanon at 1:04 PM