An image to ponder and be enlightened 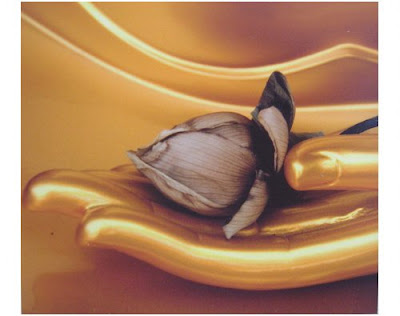 My wife gave me a framed picture as a small birthday gift. Actually she bought two from MBK center in Bangkok and offered to give me both, but I just chose only one I like better so she kept the one for herself. Both of them are beautiful. A low resolution image of the one I chose is shown here just to give reader some idea. I though it has several implied meaning, as Thai would say it has hidden Dharmma enigma. I don't know whether the photographer intended or not, perhaps he just thought that the golden and the brown colors showed good contrast, or that there were good distinction between the soft texture of the lotus flower and the solid mass of the Buddha image. I though of the (Buddhist philosophy oriented) meanings in at least 3 ways:-

First, the wilted and discolored lotus flower was earlier a fresh brightly colored flower, but then it naturally decayed with time. This clearly showed the fact that everything has its start, its temporarily stay, and then its end (die). (In this regard, according to a story in Tipitaka scripture, at least a monk 25 centuries ago could become an Arahant by looking at wilted flower.)

Second, the lotus is one entity, the Buddha statue is another entity. Although there was somebody putting the flower in a hand of the seated statue, the statue did not feel pleased or displeased. Whether the flower were beautiful, or later wilted and rotten away, he did not care nor took possession that the flower in his hand as it belonged to "me". The "well-stabilized" mind thus maintain serenity and happiness.

Third, the lotus in the hand of the seated statue can be considered as analogous to the "observer", or the "knowledgeable mind". The statue is the physical structure of the body. The mind is one part, the body is another part. They are completely separate entity. What is called a "man" is unreal, since it is a composite entity that can be broken down. (Just like a car is not real, since an unassembled car is nothing more than a heap of spare parts.) In addition, the mind is impermanent, it naturally changes with time. The "knowledgeable observer", once brightly lit, can become dimmed mind sphere. If once "fully realized" that the mind is impermanence and can change itself, that the mind is suffering, is the cause of suffer, and is uncontrollable, a person could proceed from Anakami into an Arahant, and thus can be called "an enlightened one". Mind of an Arahant is free of 10 Kilasa (mental tints), and are in the serene happiness called Nirvana.

I can not think of a fourth aspect yet.
Posted by Burachai Sonthayanon at 2:30 PM