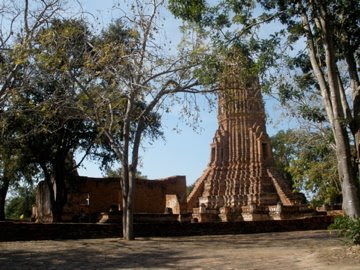 There are many Buddhist monasteries in the former capital of Ayutthaya Kingdom that are historically important in the biography of King Naresuan the Great (then known as King Nares). A noted one is called Wat Pakaew, of the famed abbot Somdej Phra Panarat. According to Thai history, around 5 centuries ago, he was the one who asked for royal clemency for a number of Thai officers just after "the battle of the royal duel on elephant backs". Not in history book, he was the one who penned the widely used Pali chanting poem which praised the 8 victories of Lord Buddha, or the "Pahoong" verses.
Wat Pakaew was also the site for the royal cremation of King Naresuan 's body. Many people believed that Wat Pakaew was renamed Wat Vorachet (The name means the monastery of the royal brother). I had wanted to visit the Wat 's ruins for some time. Only recently did I have time to visit the temple. I noticed a spine-shape pagoda there, which I though looks like those present at Wat Po in Bangkok, where they housed relices of high ranking princes of the Rattanakoin era (Bangkok). I thus rationalized that this pagoda to the north of the central Prang might be the one which hold relics of King Naresuan, after the royal cremation ceremony. There is also a shrine dedicated to him at that Wat as well. There are some monks living in this Wat now, which is a small good news. 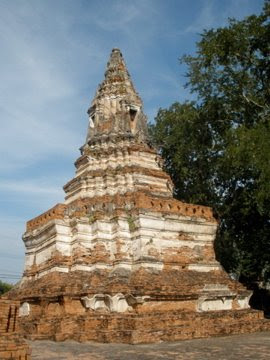