Anniversary of the battle of Koh Chang

I just found out that tomorrow, Jan 17, would be an annivesary of the naval battle of Koh Chang (1941, B.E. 2484), when 3 Thai navy ships were destroyed, HTMS Thonburi, HTMS Songkhla, HTMS Cholburi, while HTMS Thonburi was the largest ship by that time. Tomorrow, the Royal Thai Navy would organize ceremonies for the anniversary at both the HTMS Thonburi monument and at Koh Chang's naval battle monument. I remember reading about this battle when I was young, and have admired all of the Thai sailors' feat in fighting much powerful adversary ships and chased them back. I hereby salute them again in this blog. I hope younger generation of Thai people would remember sacrifices of our ancestors.

I just found a picture of the HTMS Thonburi 's crews, taken when they picked up the ship from Japan, from the net and I repost it here. The reference site (in Thai) is given in the link above. 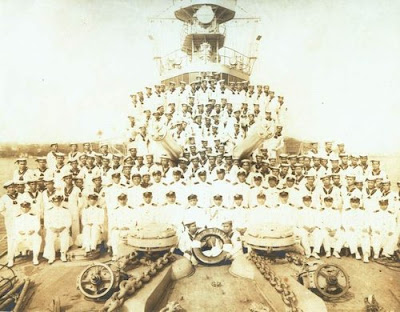