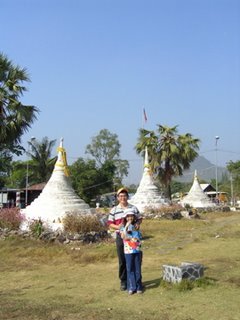 This is another picture taken in November 2004 at the Thai-Burma border. The Myanma flag can be seen in the background.

I had been fascinated by the Three Pagados Pass in Thai history of war between Hongsawadee and Ayutthaya that I wished since my school-childhood to go there.

And that 's when my BMW hit a bump and had a problem with broken engine oil pan underneath and it had to be taken out and welded in a foreign country (beyond that flag). :-)  It 's a big joke among my friends that I had to "have a BMW fixed in Burma". (In reality, it is fixed in Thailand by Thai mechanics, but there was no gas-torch in the village that could weld aluminium alloy so it had to be removed and taken across the border to weld there.)  I still remember the Thai villagers' kindness and hospitality.
To conclude the story, after coming to Bangkok, I eventually decided to replace that welded pan a few months later anyway. That incident reminded me that I should consider buying a 4WD pickup or a SUV for driving around the country.
Posted by Burachai Sonthayanon at 9:38 AM