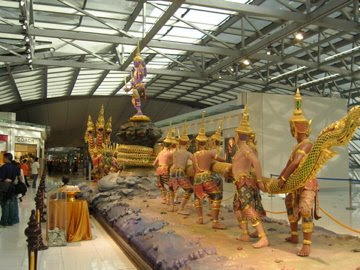 Today, my mind was sadden about the news of the siege of Bangkok International Airport by the anti-government protestors. The protestors are playing a hard ball now and perhaps most of them do not realize that, by interrupting air-transportation, they exposed themselves to misunderstanding and condemnations from international communities and ruined the dignity of the entire Thai nation now. That dignity is even more important than economic losses due to airport closure, estimated around 500 million Baht a day, not to mention inconvenience of stranded international travelers. This action is unacceptable. And for the current situation, I feel like Thailand is inching more toward breaking out a civil war between the groups of people in yellow and red for the cause of only few unworthy politicians. I hope confronting parties would now step back and give in to more reasons. I don't want to see more violence arisen from unreasonable domestic animosity. It 's a bad Karma that we should try at best to avoid.
Posted by Burachai Sonthayanon at 8:30 PM