I am now reading Khantipalo (a Buddhist Bhikkhu name) 's The Spendour of Enlightenment (Sambodhipabhasakatha), 3rd edition, B.E. 2552, 2009, printed by Mahamakuta Rajavidyalaya Press, of Nakhon Pathom (Nakornpathom) Thailand.  It's a 2 volume set of hard cover books.  Their contents are essentially excerpted translation from various sections of the Buddhist scriptures, the Tipitaka, into English. Khantipalo tried to present the story of Buddha's life and his teaching of Dhamma using not his own words. In this tedious work, he worked as an editor (who selected and arranged the texts from the Tipitaka in a story-telling manner) and English translator.

What it means is that these were taken from Pali text almost 2600 years ago, many of which were those of Lord Buddha's own sayings, narrated by the Venerable Ananda Bhikkhu, his cousin and personal asssistant monk.  Few months after the Buddha passed away around 543 BC, there was a congregation of 500 Arahants (those whose minds were free of taints) who compiled all of Buddha teachings, into 3 categories (Ti + Pitaka = 3 baskets), and they scrutinize all the words they heard, and after agreed upon, they chanted together in unison and memorize them. Each of them would later go back to their student monks and ask their students to perfectly memorize sections of the verses and chant them in unison, this went on for hundreds of years, before they were written down into palm leaves as various parts of the current Tipitaka. So they are considered very accurate.

The first volume of the excerpts covers the life of Prince Sidhartha up to his enlightenment (in Buddhist sense, not in western philosophical sense) to become the Buddha. The second volume covers from his first preaching (the turning of the wheel of Dhamma), to his last days and the Buddha's reflection of the future (i.e. the present time).

Actually, so far I have skipped the volume 1 and am reading the volume 2 now.  I can say only briefly say that, anyone wishing to know briefly about the Buddhist Pali cannon in English, esp. those parts that Buddha taught himself, should read this translation work.  Although, there are some parts which I think will likely cause difficulty in interpreting the English words, not difficult for Thai Buddhists, but definitely almost incomprehensible for modern-day English speakers with western philosophy background, they should check with others' translations, or go back to the Pali text. (Although in Thailand, we often say that it 's best to go back to meditation and check with your own experience.) Also there were some minor inconsistencies in the translator's usage of terms, and spelling. I also noticed the use of some words he used might not be consistent with what other Pali or Buddhist scholars are currently using.  Some words, for example, 'consciousness' might mean differently in different contexts. While reading, I myself had to rely on back-translation into Thai Buddhist terms to comprehend the dhamma issues.

Regardless of my comments, I highly recommend this book set.

The cover of volume 2 of the 3rd edition is depicted below. The cover for volume 1 looks the same except for the volume number. 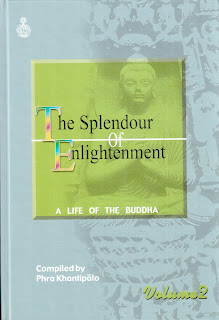 Before I end my post, I 'd like to extend my thanks to the venerable Minh An (formerly Khantipalo) for his life time dedication and great efforts in creating numerous books to us. I sincerely wish him good health and great happiness in his life.