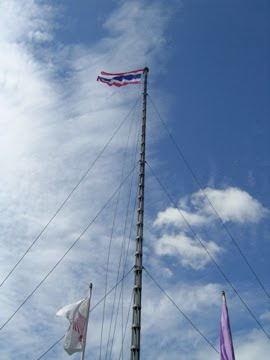 According to news from the Thai newspaper website linked above, over 300 Cambodian soldiers sneaked across border to seize a Ta-Khwai ancient relic near the border last night. The tension is increasing. It is possible that their big boss intends to attack Thai soliders outposts at the Ta Muen Thom ancient relic in the coming week, to coincide with the planned protest by Thai pro-Thaksin redshirts in Bangkok. Last week, some big guy was turned back when his aides tried to negotiate for him and his entourage to come over to visit the Ta Muen Thom ancient relic without properly arranged diplomatic protocols, and fully armed.

Last year I visited the Sisaket and Surin border area on my way driving back from Ubol. I was depressed that some parts of Thai territory was occupied by Cambodians and the past Thaksin and subsequent pro-Thaksin governments of Thailand forbade Thai army from pushing them back. Now it looks like they are trying to seize an opportunity of impending red-shirt protest in coming week trying to get more land at the Ta Muen Thom. I think they will attack our soilderrs first and it looks like we will lose some brave men before we can take action of repelling them back, perhaps down the cliff this time. I can't believe the Cambodians don't want to challenge the Vietnamese about their lost territory at their eastern border but turn to invade us on their west instead. I think they will get deadly consequence. We 'll see. For me, I feel sadden by the possible loss of lives on both sides. Many of them are people in the neighboring areas and likely the descendents of people of the same ethnicity anyway, regardless of their official nationality.
Posted by Burachai Sonthayanon at 9:38 PM

Hanoi is Hun Sen's master. He would not dare challenge Vietnam's seizure of Cambodian land. When protestors tried to a few years ago, Hun Sen sent sent soldiers and police to attack them with bullets and grenades. Hun Sen uses the Thai border to stir up nationalism among the Cambodians. It is all about domestic politics and his desire to stay in power as long as he lives, followed by his son who commands on the Thai border. Hun Sen does not care who dies, Khmer or Thai. He only cares about being the leader.