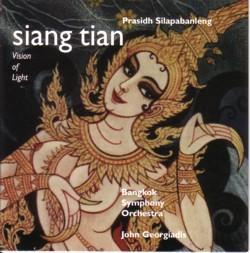 This is my first attempt to post about music in my blog, Thai classical music that is.

I digged up a CD album by the great music master and composer, Prasidh Silapabanleng (1912-) to listen again last night.
I started to be bored with the like of Bach's, Vivaldi's, and other Baroques I normally listened. I have a mini stereo set and a TV on my writing desk in my home office just behind my laplop here.
Althought I stumbled on this album by chance and bought it last year, the content actually came from a life-performance which took place in 1995 in Bangkok, by the Bangkok Symphony Orchestra (BSO), and it was later produced in the CD form in 1996.
It was an excellent and great music. I can not verbally express my feeling enought of it.
Historically, Siang Tian is also interesting since could be considered his family's work of 3 generations.
The original Thai music version was an ancient second-speed one, perhaps known by Thai musicians since the Ayuthaya period, and the late great music grandmaster, Sorn Silapabanleng (better known in the royally bestowed Thai official title of "Luang Praditpairoh) composed it into a full set of Thai music.
Mr. Prasidh, or as we Thai called him Ajarn Prasidh, recomposed his dad's Thai version into a western one in the form of string quartet and later for the symphony.
(Newer generation of Thai must have known both of them through the characters depicted by the movie, The Overture (or Hom Rong, in Thai).
Executive producer of the CD as stated in the CD's cover is Mr. Prasidh's son and thus Luang Praditpairoh's grandson.
There are other excellent songs in this album, including the well known northern Thai tune called Damnern Sai (Walking along the sandy beach). The Siamese Suite is also very nice.
I do not think one can easily find this CD on sale any more. If one finds it, I think it 's worth buying to listen to and keep in one's collection.
Posted by Burachai Sonthayanon at 10:02 PM

I'm happy to read that you enjoyed Siang Tian, a record I had great pleasure in conducting in my years as Bangkok Symphony Conductor 1994-6. I was approached by Mr. Prasidh Silapabanleng, a most refined gentleman, and asked to orchestrate and arranged five of his works, which are featured on the recording. It was a delight to collaborate with him.
John Georgiadis.

Thank you so much, John. I am honored for your visit. I also just hope that Thai people would be more interested in your work. But I have not seen this album on sale any more in some common places I visit though. (But I don't do much shopping.)

Thank you for your response. I came across the Silapabanleng reference through a Google search as I am performing one of the works I arranged for him, Shadow in the Water, in KL in a week's time (Oct 09). I was looking for more of his biographic details other than what I've already posted in the "Tributes" section in Musicians Gallery, a website I constructed and still manage after more than decade.
John Georgiadis