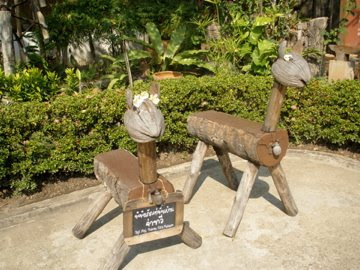 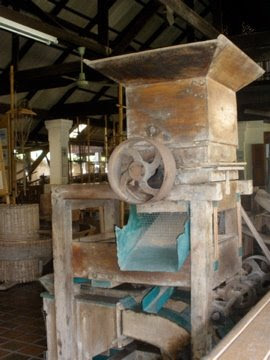 We also stop by to visit the award winning Sgt. Tawee 's Folk Museum, a private museum showcasing of his love of local knowledge-base. In it we found thousands of old equipments used in day-to-day life of local villagers, including wooden farm gadgets, traps of great designs for various sizes of fish, for various animals, and for birds. There were also hundreds of old toys, kitchen wares, some of which we found it to look funny (o.k., o.k., I 'll say it explicitly, like a coconut scraper shaped like a bunny with a dick, for example), and century old pictures, to name a few. Many items are over a century old. There was a sign saying "no photo inside" the houses so we did not take pictures inside, out of respect. Not many visitors came to the museum each day and it is operating at a loss. There was a newspaper clip posted on a board there, saying that the museum may be closed this coming April. If that is true, it would be sad.

We decided to support the museum somewhat by spending over an hour at the museum shop and buy a lot of things.
Posted by Burachai Sonthayanon at 9:31 PM