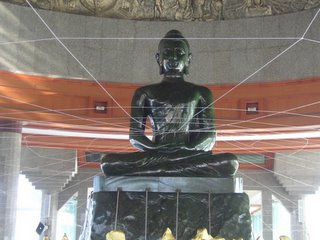 Today is New Year's eve so I decided to make some merit. I went to Wat Dhammamongkol, in Soi Sukhumvit 101, where the World's largest jade Buddha image is placed. Behind the statue, there was also a jade Guan-im, a chinese female-form of an incarnated bodhisatva. Both statues were sculpted over a decade ago from a 32 ton dark green jade block from Canada. The Buddha statue was crafted by an Italian artist. The King has given the name "Phra Mongkoldhamsrithai" to the statue, which had been meditated upon by the venerable Phra Sangkharaj and other meditation-master monks. I had read about it recently and decided to go to pay my respect. Seen in the picture, the white threads linked like web from the statue were just tied in by monks in preparation for a meditation ceremony to be held a week after this post.

Before I left, I donated some cash to join an effort to build a Buddhist Ubosot (or Uposot ?, the main congregation hall).

Oh, I forgot to mention that this Wat also has the biggest (perhaps tallest) traditional style Buddhist pagoda (Jetiya or Jedi). To me, it looks like Indian style structure except for the attached Vihara and the white pagoda at the top of the 11 storey-high building. 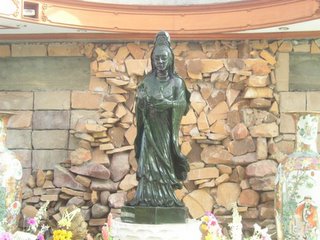