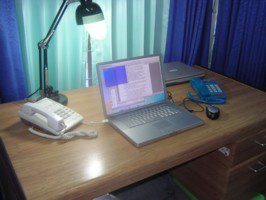 I have been using my new Apple Macintosh 15" PowerBook for about 2 weeks. Before I praise all of it, perhaps I should mention 2 of its shortcomings right here. First, the battery that came with it has been dead since the beginning , and now I am waiting a replacement from Singapore. This is a features that Apple touted about, it should be able to hold electrical charge for 5:30 hr of usage. Too bad, mine was probably among the first lot of this laptop model arriving in Thailand. Second, my keyboard did not contain Thai letters stenciled onto it. I could not blame other people, since I told Apple 's agent in Bangkok that I badly need to use it now that I had deadline of jobs coming so that 's why they sent one machine to me as soon as they got them out from the customs at the Bangkok International Airport. And that's why there is no Thai letters labeled on the keyboard. Now I do not want to send back to the Apple agent to have the keyboard stenciled, mainly bacause I don't want to be without the machine even for a day.

Apart from these two flaws, all others are great. To be continued on part 2 in a few days until I have cleared out my backlogged jobs first.
Posted by Burachai Sonthayanon at 12:42 PM